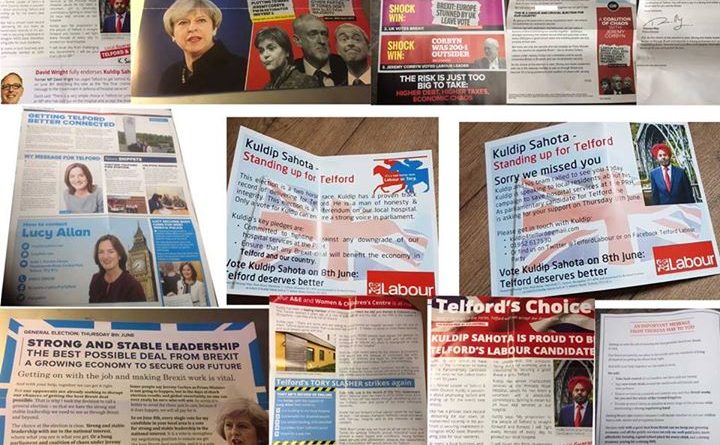 It’s about what you don’t say

This week I asked for copies of all the electioneering material you’ve had posted through your doors in both constituencies. You came up trumps, so we have a selection. With Labour in Telford working on 40,000 print runs and each home getting at least three items, plus what is being sent out centrally, there is fair bit to take a look at.

What’s interesting is not just what has been included, but also what’s been left out. About now, some of you will be screaming ‘bias’ as you expect me to launch into a ‘Why no Corbyn in the leaflet?’ We’ll it’s a good and fair question. There isn’t a mention. Not once on anything I’ve seen is there a picture or a quote from Jeremy Corbyn.

In my survey of Telford and the Wrekin, both constituencies considered the party leader to be important, as important, as the local candidate. Right now, I’d suggest Labour supporters are about to blow a fuse, so get a cup of tea and sit down before taking to twitter.

Theresa May has written to many people (but not me) and in the letter, the contributor who sent me a copy mentioned that there wasn’t a Conservative logo. She was right. What she didn’t spot was the fact that there were no mentions of the word Conservative either. I checked. Twice.

Campaigning is a complicated, technical business. Focus groups will have been selected and asked their opinions, and from this, the mechanics and tactics are drawn up. In both the main parties, it seems like they each have something they don’t want to shout about.

Take a look at some of the election leaflets and tell me what you think.

Just less than three weeks to go, and we’ve seen claim and counter-claim about fake photos in campaigns. The most famous one was the picture from Lucy Allan at a door with a resident who later pops up, seemingly delivering Conservative Party leaflets.

I asked Lucy about the story. Turns out the guy in question is Mike. An ex-Labour Party member was a concerned resident, who had turned to Lucy for help when his Woodside fish & chip van licence was revoked by the council. Although Lucy was unable to get him his licence back, Mike had to close his business, he chose to help with her campaign.

Mike has since found another job, and commented ‘I used to be a Labour member but I no longer stand for their values since the local labour council played a part in destroying my business, and my childrens future’

Should this be chalked up as a fake claim or a missed opportunity for Labour to support a small business locally?

As an aside, why does Woodside not have a chip shop?

No back room deals says Kuldip

When left of centre parties collude to not compete against each other in constituencies where every vote counts, like Telford for example. The idea being that Lucy Allan won by 730 votes, Green Party polled 930 votes and if they hadn’t have stood and those votes went to Labour, they would have edged it.

Joanne Gallagher, the superb BBC reporter, broke the story this week that the Greens offered to stand aside in Telford in return for a commitment that Labour would stand aside at the next council elections (2019) in a number of wards, letting the Greens pick up a couple of Telford & Wrekin Borough Council seats. Labour refused, Greens say dismissed the offer. I’m a little uneasy that political parties reduce the choice for you and I, in order to carry out a land grab, but does Labours reticence to take the Greens up on the offer mean Kuldip and crew have to work even harder to make up another 1000 votes that they could have almost counted on?

Who knows. What we do know is that nationally UKIP are not standing in marginal seats where there is a pro-leave MP. The thought being that the majority of the 7330 votes won by Denis Allen in 2015 will transfer to pro-leave Lucy, rather than Kuldip, who supported the remain campaign. In fairness, Kuldip did tell me ‘We are all brexiteers now’, but will that be enough to convince pro-leave Telford folks?

Has anyone seen Mark Pritchard?

Yes, me. I met Mark for the first time since the count in 2015 on Friday. We met up as part of the Telford Live video interviews with all the candidates in Telford and The Wrekin. I’ll be honest, I didn’t recognise him.

Mark looks about 5 years younger, lost a lot of weight and looks nothing like all the pictures used on his website and marketing material. Mark had plenty to say about PRH, local Labour and his proudest achievement for the area before popping off to pick something up for supper at the Co-op. You’ll have to wait until next Sunday to see the video.

I have the Election results

Not a hotline to the Kremlin, but the Dothill and Arleston wards for Wellington Town Council. Not a huge amount to report party-wise, Labour retained Arleston, with Giles Luter and Conservatives retained Dothill with Lisa Jinks.

What was impressive was the 33% turn-out for a Town Council seat. The last election in Telford was Lightmoor & Horsehay where Cllr Raj Mehta won a seat on Borough Council (Member of Parliament = Premier League, Borough Council = Championship, Town & Parish Council = League 1) turn out was just 17% in 2016 compared to 67% in 2015. 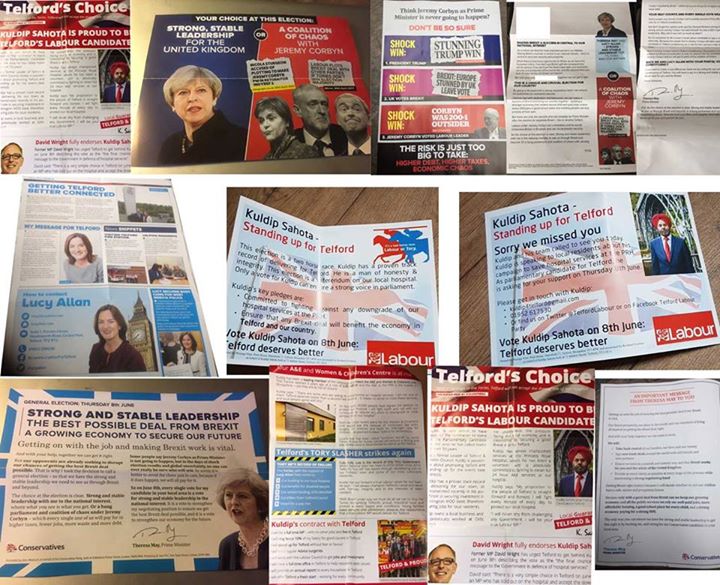