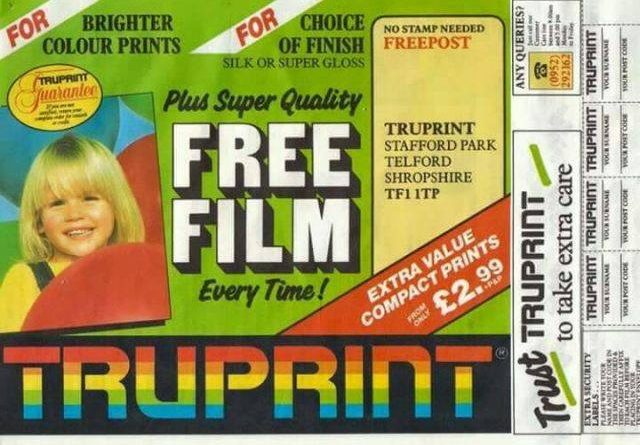 Gone but not forgotten.

It’s Friday and on Fridays I like to have a little think about the things I miss.

Things change, often for the better but here are some things that are no longer a feature in Telford life.

Kids don’t know they are born. Taking 24 selfies before sharing the perfect one on Insta.

Back in the 1980s the UK often sent their film off to a place in Telford called Truprint in a pre-paid envelope to be processed. Most films had 36 chances to get the perfect shot, but here’s the twist; you didn’t see any of them until the envelope dropped back through your door a week later.

No nudes is good nudes. Each photo was manually screened and anything of a dubious nature, what Rhianna might call nudey nudey nudes, would be binned* and a little note included in your returns.

Trivia: The little blond girl on the envelope was a little girl from Much Wenlock.

* Make the Truprint Hall of Fame in the staff canteen

The French nappy maker came to Telford when we had a special offer on rent & rates.

Like many companies that came to a fanfare welcome, they left after the offer ended, to some other enterprise zone.

Unlike the other companies, I can safely say without fear of retribution that their products were full of shit, and they did a good job of taking the piss.

Triva: Their logo is faded but still visible in Cornerstone House, Stafford Park.

Back in 1983, computer games were on cassette tapes. Manufacturers like Ablex on Halesfield took a master tape and copied it on machines that would not look out of place in a Bond villains lair, or the bridge of the Starship Enterprise.

In order to get the stock into the shops for launch, Ablex would often get the game master tapes weeks before the launch. Having a mate who worked there was a major perk for a 17 year old in Telford in 1984. A bit like having a mate with the keys to Nandos would be now.

Mystery surrounds the demise of the construction firm that was based out in Shifnal. A victim of the crash but with the added twist of a precious stone.

Listed amongst the assets of the company was the Wrekin Ruby. Valued by some random Italian at a huge sum, the company hoped it would provide security for loans to keep the business afloat.

An independent valuation revealed that may as well have been a painted rock, the likes of which have been gracing the parks & fields of Telford this summer.

The trucks bearing the Wrekin Construction logo are now consigned to history, but the many projects the workers worked on will be around for a long time to come.

Telfords first real nightclub. Some might say the sticky-floored Barons Club in Wellington might contend for this title, but fite me, bro.

DJs like Clive Jones and Paul Shuttleworth are still going strong in Telford and many disco dancers who went to the opening will be knocking sixty right now.

There are photos knocking around of some hopelessly 80s ‘Miss Wet T Shirt’ competition winners. I won’t share because the winners are probably grandparents now.

Trivia: One DJ from the 80s is still plying his trade today, but in Hong Kong

The mega shop was in Telford Shopping Centre, where BHS once was (another story.)

Many Telford teenagers at the time earned their pocket money by collecting shopping trolleys from lazy or kind shoppers to redeem a 10p deposit from an old man in a canvas kiosk.

Some of these teenagers went on to become leading Telford entrepreneurs.

Carrefour eventually became Asda and moved to the other side of the centre.

Trivia: No one is 100% sure of the correct pronunciation of the shop name. Carry-fore? Carr for?

Almost gone, but not quite. Still a visual force in the Gorge, the conveyors are coming down this year but the long term plans for the site & structure are as yet undecided.

The station no longer contributes to the national grid, but the quartet of imposing pink towers have pulled at the heart strings of locals. Many gorgers would like to see them saved for posterity.

Triva: The power station is not actually in Telford, so we don’t get a say in what happens.

About where Lucy Allan MPs office is now, once stood a maggot farm. Quite how large the appetite for maggots was in the 70s & 80s, I have never fully understood.

I have also never met a maggot farmer, so do not understand the skills needed to be a good one, although I understand maggots don’t need to be milked or herded by dogs.

What I do understand is the stench that wafted across South Central Telford from this god-awful hell hole. A hot summer was nothing to look forward too.

Maggots need feeding and rumour has it that dead cows were chucked in whole to provide sustenance to the little critters.

All in all, one Telford landmark that we’re glad to smell the back of.

Urban myth? I’ll have to be honest, I doubted myself. Did this really happen or did I dream it?

A real snow slope in an industrial unit on Stafford Park. Making real snow using a machine is quite a challenge. Even more so back in the early nineties.

It didn’t last long, but we had one. I think.

Trivia: The company that made the snow machines have gone on to set up real snow slopes in places such as Dubai, Manchester and Tamworth.

Ironbridge is known for one major first, but do you remember the petrol pump at the bottom of Jiggers Bank that took one pound notes?

Back in 83/84 If you were short on fuel, you could slide a quid note into a metal tray and get a pounds worth of fuel without anyone serving you. Fully automated.

A pound these days would not get most people to the top of Jiggers Bank but back then, a pound would get you about 4 litres or three quarters of a gallon. Enough to get to to Shrewsbury, should anyone really want to.

Trivia: if you didn’t have a pound, you could stamp on the pipe and get a pint or two out. I have no idea why this automatic pump closed.

What do you miss? 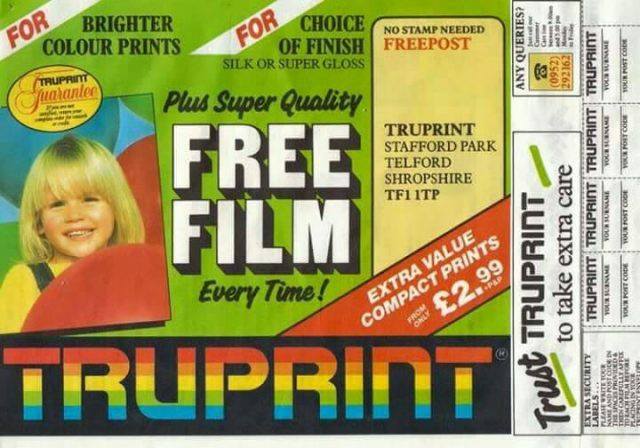 26 thoughts on “Gone but not forgotten.”