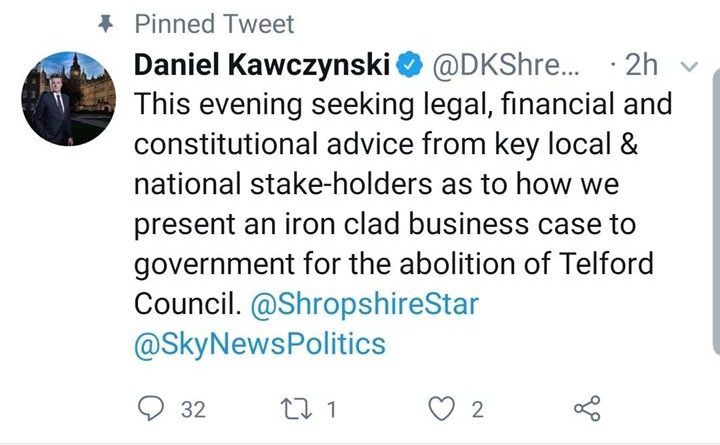 Th th th that’s all folks, Telford is over.

Or it would be, if Shrewsbury MP Daniel Kawczynski had his way. He tweeted tonight that he is seeking a way to abolish Telford Council.

I’m assuming that he would like to see Shropshire Council take over, bringing it’s vast expertise of turning most things it touches into shit. And expensive shit at that.

Just this week, it was revealed that the shopping centres they bought through a third party company, avoiding, tax have lost £11m in value.

Who could forget the IP&E shitstorm that was supposed to be a vehicle to sell Council services to other organisations but saw Council officers moved from Shire Hall around different rented buildings around the town, and then back to Shire Hall, with company being shut down. The lawyers and removal companies were the main beneficiaries.

Telford MP Lucy Allan, said “…We have excellent council officers in Telford doing their best for the people of our borough and of course we must have our own council to represent our area. We are so different from leafy affluent Shropshire and have very different needs…”

“There is no evidence to suggest that a merger will provide stronger strategic and local leadership which any proposal to the Secretary of State on local government structure would need to evidence”.

“Any application to the Secretary of State would also have to command a good deal of local support across the whole area of the proposal, which would see this scheme if ever submitted ultimately fail as it would likely receive little support from residents here in Telford.

“Any unitary proposals should truly be locally-driven, voluntary and bottom-up and there is evidence to suggest that people feel more removed from local decision-making if the units of democracy are bigger.

“Whilst neighbouring MPs are entitled to their views I can categorically confirm that these views do not represent the views of the Conservative Party nor the views of many residents living here in Telford”.

What’s your message to DK? 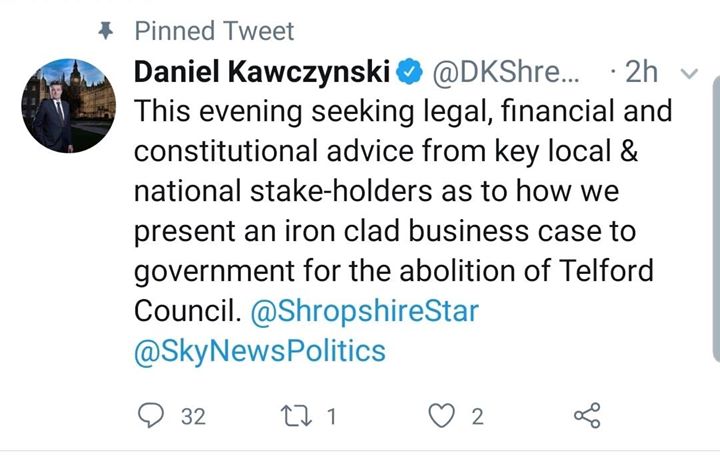 18 thoughts on “Th th th that’s all folks, Telford is over.”