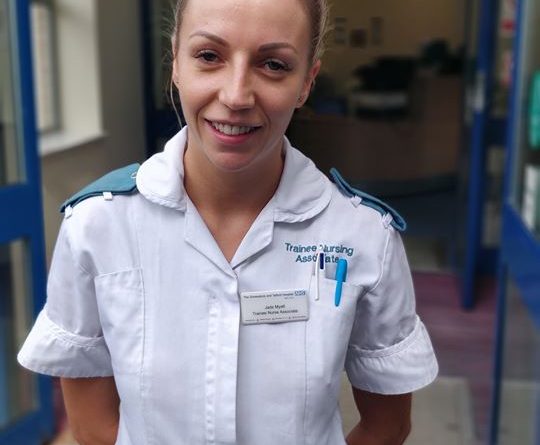 A Trainee Nurse Associate has been praised for saving a man’s life after she came across a car crash near her home in Telford.

Jade Myatt, who works on the Acute Medical Unit (AMU), was driving from her uncle’s home in Stirchley to her own house in Madeley when she came across the accident.

The driver of the car had been taken ill at the wheel and had narrowly missed Jade’s house before crashing into a field.

Jade said: “I got out to make sure everyone was ok. The driver’s wife was out of the car, but a gentleman who was passing by when the accident happened said he was concerned that the driver’s breathing had changed.

“I went to check on the driver, who was still in the car, and his breathing was very poor. I suspected he was having a heart attack and that he needed immediate treatment.

“I pulled him out of the car and asked the other gentleman to help me support his head and then gave him CPR until the ambulance arrived. When the ambulance crew arrived, I continued CPR to support them.”

The heart attack developed into a cardiac arrest and the driver was taken to the Princess Royal Hospital (PRH) in Telford where he was stabilised before being transferred to University Hospitals of North Midlands in Stoke.

Jade said: “The paramedics knew I worked in AMU at RSH and they spoke to my manager. The gentleman in question is doing really well and is now back at home. They said if I wasn’t on the scene, the outcome could have been very different.”

West Midlands Ambulance Service Senior Operations Manager for Shropshire, Rob Till, said: “In a cardiac arrest, every second counts. For every minute after the heart stops and no-one is doing CPR, the patient’s chances of survival drop by 10%.

“The fact that Jade was there and able to start CPR massively increased the chances of the man surviving; her actions undoubtedly gave him the best possible chance of making a good recovery.

“Jade’s actions show how being prepared to do CPR really can make you into a lifesaver. This is one of the reasons we would urge everyone to learn the skill as you just never know when they might be called upon to help someone, be it a friend, loved one, or as in this case, a complete stranger.

“Congratulations to Jade and we wish her every success in her nursing career.”

Hannah Pope, AMU Ward Manager, said: “We are so proud of Jade. She goes above and beyond every day in her role as a Trainee Nurse Associate, so it does not surprise me that she has done the same outside of work.

“It goes to show how good CPR can truly save someone’s life. We are so proud to have Jade on the AMU team.”

Jade is due to qualify as a Nursing Associate in January. She plans to gain some more experience before going on to study to become a registered nurse. She plans to stay at The Shrewsbury and Telford Hospital NHS Trust (SaTH), which runs RSH and PRH, and hopes to work in A&E. 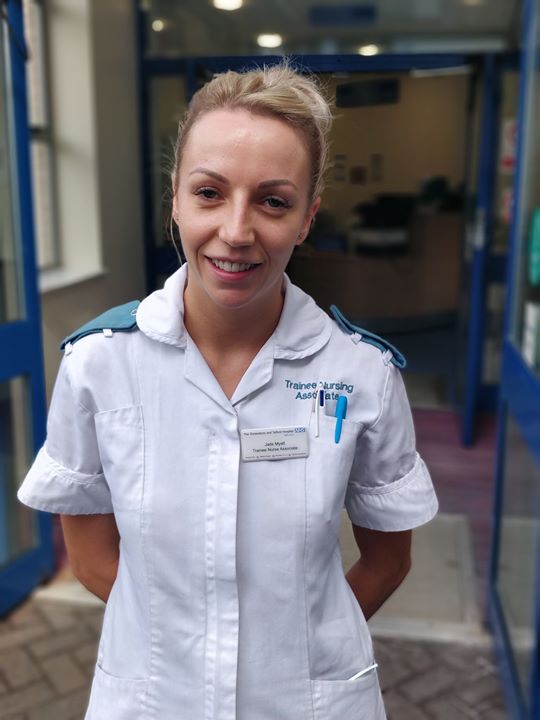