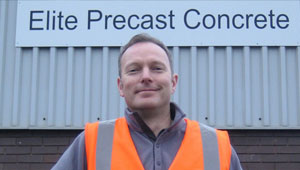 A Shropshire precast concrete manufacturer is ending a hugely successful year in style after being formally accepted as a member of an influential industry body.

Elite Precast Concrete has become a full member of the British Precast Concrete Federation (BPCF), the trade association for precast concrete manufacturers. The move sees the Telford-based firm join almost 80 other full members, plus a similar number of associate members from sectors such as plant and equipment providers, universities, and engineering.

Founded in 1918, the BPCF forms a powerful voice for its members and the wider precast concrete industry, which is said to be worth an estimated £2 billion a year, by lobbying the Government, the European Commission, and other bodies such as the Health and Safety Executive, on their behalf.

“Becoming part of the BPCF was a natural move for us, and one we are extremely pleased to have made,” Owen Batham, Sales and Marketing Director of Elite Precast Concrete, explained. “Membership will enable us to forge stronger links with other leading organisations in the sector and its supply chain, allowing us to work together and share expertise for the wider benefit of the entire industry. It will also give us the chance to have our opinions heard by key decision-makers, influencing the policies and standards that will impact on the day-to-day running of our business.”

Martin Clarke, Chief Executive of the British Precast Concrete Federation, commented: “We are delighted to welcome Elite Precast Concrete as full members and as supporters of our ‘Raising the Bar’ drive to be the most environmentally sustainable and safest sector in UK construction. It is an extremely successful company, with clients in a diverse range of sectors both in the UK and internationally. We look forward to working alongside its team in the months and years to come.”

Becoming a member of the BPCF comes at the end of a hugely successful 12 months for Elite Precast Concrete, which was founded in January 2008. More than 20,000 of the firm’s interlocking blocks were used as kentledge – robust counterweights – to hold almost 30km of perimeter fencing in place at 60 venues used in the London 2012 Olympics, including the Olympic Park and Stadium in Stratford, while its ‘V’ and ‘Lego’ blocks have continued to be a popular solution in industries as diverse as local authority and recycling, where they are used to create robust waste storage bays, outdoor events, where they are called upon to counterweight marquees, stages, and security barriers, and transport, where they act as a sturdy form of embankment retention.

Elite Precast Concrete’s environmentally-friendly production processes and use of advanced online sales techniques saw the firm scoop the Innovator category at the inaugural West Midlands Business Masters Awards, while the summer also saw it team up with finance broker Kata Crushing & Recycling Finance to launch a first of its kind in the industry package that enables customers to buy its interlocking blocks using competitively priced finance.