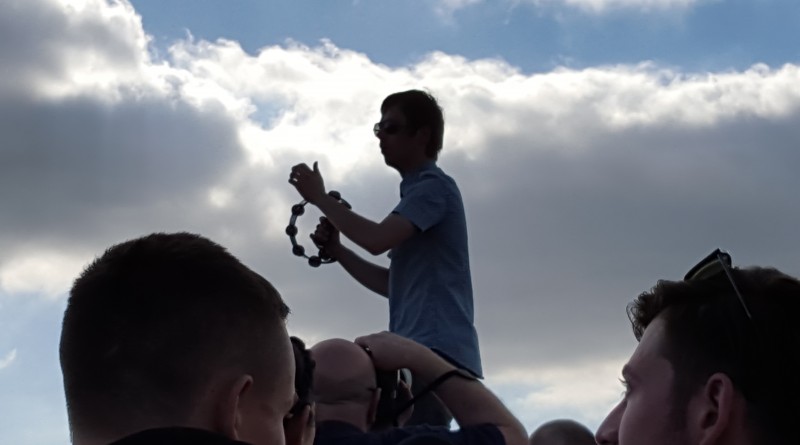 The sun shone, the heads-up had gone out over social media and I was one of probably 300 who made it up the increasingly steep slopes to the summit of one of our most prominent landmarks to see a full stage set up, complete with a gathering of music lovers and a handful of bemused runners who we’re unsure what was going on.

Just back from Blackpool, Savannah are made of brit-pop.  It’s in their DNA, they wear it’s clothes, display its attitude and embrace it’s music, but they are more than that.  With a nod to The Who and and the odd reggae beat, they are band who clearly enjoy what they do, and so do their strong local following, some of whom also made the trek today.

The sound on the Wrekin was better than I thought it would be.  From Harry Neats spot on drumwork, to the consistently impressive vocals of frontman Liam Ball, every song was tight and sounded like they have been playing together for much longer than the 2 years they actually have.

Jason Lewis on lead guitar looked like he was having the time of his life on stage and that came across on in his enthusiastic playing style and authentic sound.  On bass and support vocals, Tom Jones, gave a rock-solid performance delivering an essential part of the Savannah sound.

I’d also like to recognise the support acts.  Louis and Tom from Guitar Cubed.  Only 13 and 14 years old but gigging regularly and about to start writing their own material.  The Raiders are a five-piece from Telford, sounding great even on a makeshift PA, and you’ll be see more of these guys in the future, I guarantee it.

Well done to the Hands Around the Wrekin team for helping to get today on.  A few people in the crowd said it would make a great annual event, but I think it will be a long time before we see anything like this again.