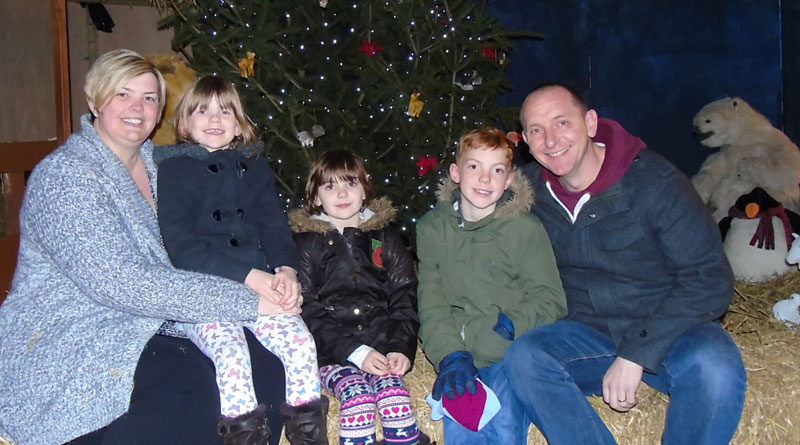 Putting up the Christmas lights is guaranteed to cause havoc whenever it’s time to decorate the tree, and it was no different at award winning Hoo Farm during the opening night.

The annual Step Into Christmas event – now in its 24th year – nearly lost its sparkle when it was discovered that Whisper the Donkey had chewed through the Christmas tree lights. Will Dorrell, of Will’s Wild Animal Encounters, the good humoured Hoo Farm Manager said “once we saw what Whisper had been up to we knew for sure he was on Father Christmas’s naughty list – hopefully he will perform well enough in the nativity to get back on the nice list! Luckily we were able to work some Christmas magic, and the Tree of Light was lit as planned, to the delight of our 60 guests.” ​

Visitors started the evening with a mince pie and glass of mulled wine, while enjoying some live Christmas music, performed by Kathryn Dean-Netscher on her saxophone.

Andrea Harrison, of Southport, attended with her two daughters and five grandchildren – including 8 week old Madison – after winning the Hoo Farm Facebook competition which included a one night stay at the 4 star Q Hotel Telford Hotel & Golf Resort.  Andrea said “what a lovely way to start the Christmas season, with my whole family around me as we watch the very unusual nativity at Hoo Farm.”

Telford was treated to enthusiastic carolling, baaing and booing (of King Herod!) as the audience were encouraged to participate in telling the story of the nativity. Whisper the Donkey redeemed himself with a sterling performance, carrying Mary and Joseph – played by local children Aimee Gough (6) and David Harris (11) – to the inn.

In the spirit of the season, Will spread some Christmas cheer through his joyful (and triumphant) speech, thanking everyone for coming and telling guests about the exciting developments coming to Hoo Farm in their 25th anniversary year 2016 – watch the website for more information. He also announced the winner of the most recent online competition: lucky winner Mandi Gough, of Shrewsbury, took home an annual family pass for Hoo Farm, after successfully spotting the most Christmas songs in the Step Into Christmas mailing.

Local children were thrilled to get their first glimpse of Father Christmas as he made a surprise appearance to check on Whisper’s behaviour, and to remind everyone that he would be visiting on Christmas Eve – if he was left a sherry and a mince pie!

Founding partner Carolyn Dorrell said “Christmas is a very special time of year for families, and as a family run business, we like to welcome in the holiday season as one big happy Hoo Farm family, with staff, customers, and animals enjoying a night of festivities. Thanks to everyone who supported us last night, and throughout the year. Merry Christmas!”

​​The Hoo Farm Animal Nativity will be performed daily up to and including Christmas Eve, with special appearances from Father Christmas at the weekends.