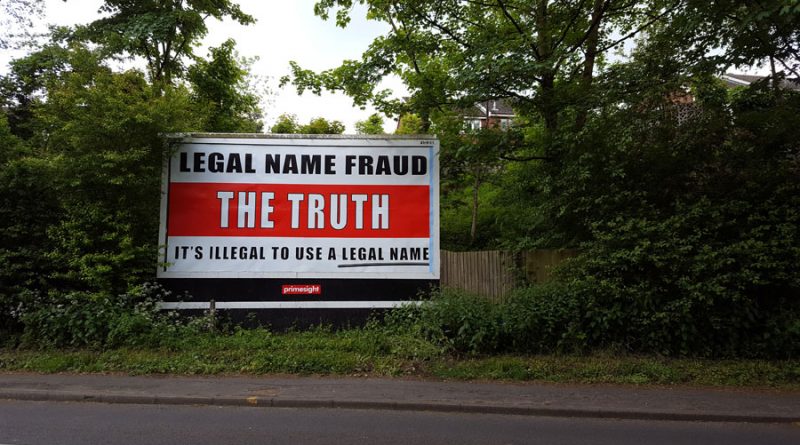 A new billboard in Telford is making residents scratch their heads.

The advertising hoarding is a simple one.  It just features the words ‘Legal Name Fraud  – The Truth – It’s Illegal to use a Legal Name’, in bold capitals and no clue as to what it’s for or who put it up there.  Telford isn’t alone.  These Orwellian hoardings have been seen in towns & cities across the country this year.

So what are they?  Well, they are not EU Referendum posters gone wrong. What isn’t as interesting as why.  The message is about having  a legal name makes you property of the state, not a new message, it’s been discussed by conspiracy theorists since the internet forum was created and probably the subject of an underground magazine or activists pamphlet before that.  If you are interested, this might give you more information.  Still confused? Don your tinfoil hat and have a look on Youtube for ‘legal name fraud’.

The Paypal Donate button suggests that donations are paid to an outfit called MaEiOu International Inc N.V.  The N.V. or NV suffix is used in the Netherlands, Belgium, Suriname, Dutch West Indies, Indonesia, Curacao, St. Maarten and Aruba.  Socking it to the Man.

Give them their dues, they are industrious. They have a 7 day a week radio which I’ll admit to not having heard but would safely assume very little Justin Bieber airplay which makes is somewhat more likely I would.

More interesting is why someone would pay money to erect these adverts all around the UK?  If it’s to raise awareness, then I guess it might be judged a success.