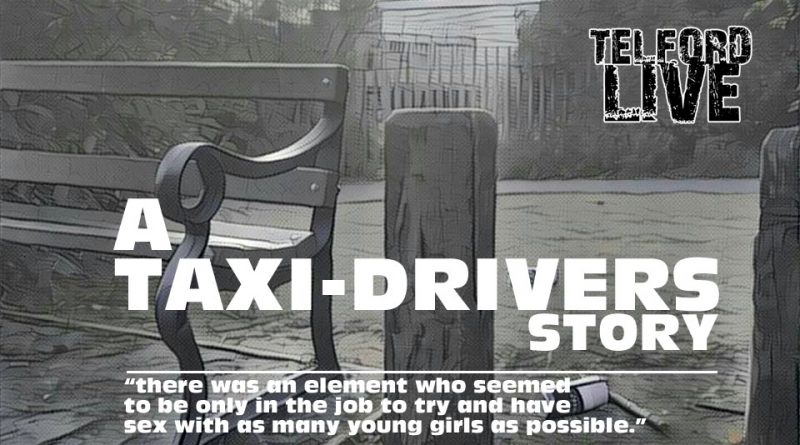 I grew up in Hadley, Telford and me and my mates used to see it for myself. We tried to warn the girls but we were just called racist. Any one will tell you I’m the furthest possible from from racist. Some of the Asian lads my age were warning them too but the Mercs and BMWs, drugs and booze was too tempting for them.  We had no idea at that time what grooming even was.

When I was at school (Orleton Park in Wellington) in the mid 90s, girls 14/15 years old would regularly be picked up at lunch time in cars and taken off for an hour. Yes they were usually Asians in the cars but not always.

Tanveer Ahmed
So I drove taxis 2005-2010 and for the first 3 years I did only nights.  At the first company I worked for, I was close friends with the guy who shared a taxi for a short while with a man called Tanveer Ahmed.

Now 99% of the drivers I knew were totally sound. Good, honest people trying to earn a living, but there was an element who seemed to be only in the job to try and have sex with as many young girls as possible. I must point out that this element contains drivers of various races.  I kept myself to myself on the job because I was only interested in trying to earn a living, but outside the office or at the taxi ranks, sometimes i’d get other cars pull alongside and have to talk to them.

At the time I thought Tanveer was a slimy character. He was sacked from there a little while after when he went AWOL with a licensed taxi for 3 weeks and was caught by other drivers using it to pick up girls from Pussycats. His radio and data had been deactivated so he was doing what we called “flyers” (unbooked jobs). Who knows what else he was up to using that taxi.

Tanveer Ahmed was later to be convicted of controlling a child prostitute.  I felt sick when I saw Ahmed in the news, knowing I’d worked with him and wondering what may have gone on in my mates cab.

Off the grid
It was when I moved to a company that was based in Wellington that things got interesting. I lost count of the amount of young girls that were taken back to some Portakabins that aren’t there any more. One driver bragged to a couple of us that they could get “bitches” and there were several taxis operating “off the grid” around the town at that time.

Taxis running “off the grid” were plated up with official signs, but not logged in to the taxi company booking systems. They were touting for business. Funnily enough it only ever seemed to be young girls who they were picking up. I genuinely can’t say if the taxi company owners knew what was going on, but some of the operators did and they weren’t happy about it.

I discovered by accident where they took the girls because I saw them a couple of times.  Just outside Wrockwardine village on the little road that brings you out just by the old Esso garage on the old A5.  There’s a lay-by and I saw taxis there a few times late at night. One day when i went on day shifts I pulled up at the lay-by waiting for a job. I looked out of car window there were loads of used condoms in the hedge and on the ground.  Also down the back of Hortonwood Industrial Estate was another place I’d see the cars parked late.

Up by The Wrekin too, round by old forest glen car park. That’s also where they take people to beat them up for whatever reason.

I swiftly got out of that company and switched to day shifts. I got fed up of seeing all the stuff going on. I felt like Travis Bickle from the Taxi Driver film working nights in what appears to most people be a quiet town.

Complaints
There was a white, English driver from Madeley. I heard he was caught messing around with a teenager and he lost his badge. There was also another (white) driver who has had numerous complaints made against him but always managed to get away with it. Not sure if he’s still badged and working today, but he certainly was a couple of years ago.

Both of them constantly talked about sex and girls whenever you met them.  It got to the point where I actively avoided them. If they came to park by me, I’d pretend I had a job on my screen and drive away.

I did mention this to the management, but  I got the impression that they didn’t act on it, as long as they were getting their radio rent.  The attitude seemed to be that the drivers are self employed, they only pay us to get work so what they do in their cars is their business

I do know that one or two of what I would call seedy drivers are still on the road around here and I personally wouldn’t send my teenage daughter alone in a taxi without first seeing who was driving it.