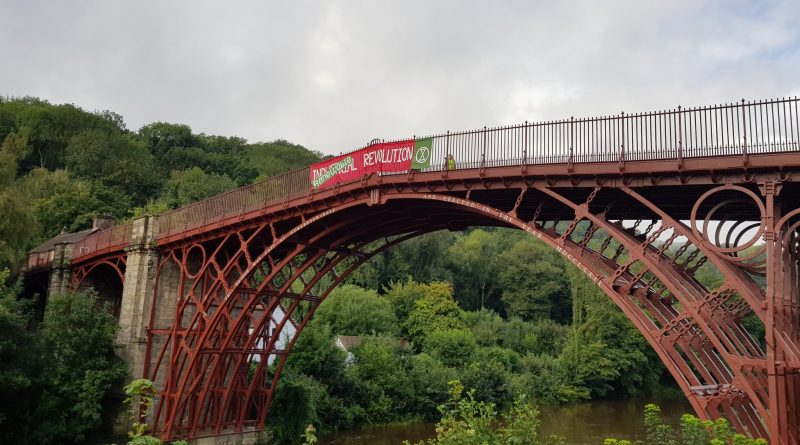 Highlights Telford News
August 28, 2020August 31, 2020 admin 0 Comments Activists, banner, Climate, ironbridge, Protest
Members of Extinction Rebellion Telford draped a banner over the historic Iron Bridge this morning as part of a UK wide action to highlight the ongoing climate emergency and to announce the start of the 2020 Rebellion.
“We want the government to tackle the climate crisis head on. We need to urgently slash emissions and switch away from fossil fuels, but the UK is nowhere near on track to meet our 2025 and 2030 carbon targets. We need real leadership on this issue, but our government is ignoring the science and failing to act.” said Extinction Rebellion spokesperson Dave Ashdown.
The dropping of banners from bridges across Shropshire and the UK is being used by Extinction Rebellion to herald the beginning of the 2020 Rebellion, which is beginning in the regions before moving to London, Cardiff and Manchester. The two Rebellions in 2019 succeeded in putting climate change on the front page as well as moving on the conversation regarding the climate emergency, and the group hopes the 2020 edition will achieve the same.
XR spokesperson Dave Ashdown “2019 obviously brought Extinction Rebellion into the public consciousness, but since then we have seen little political will to make the changes necessary. Earlier in the year we saw devastating floods here in Ironbridge where we are today, then we had the sunniest spring since records began, and that’s just Shropshire. Around the world we have seen record breaking temperatures in the Arctic circle, bushfires in Australia, devastating floods in China, everywhere you look the effects of the climate heating are being felt. That is with just over a degree of warming on pre-industrial levels, and yet the Government’s own website tells us we are on course for 4.8c of warming over the next 80 years. You really have to question why they won’t act.”
The national Rebellion begins in London, Cardiff and Manchester on Tuesday the 1st of September and coincides with the return of Parliament, when MPs will be asked to consider supporting the Climate and Ecological Emergency Bill which is backed by a number of environmental groups.