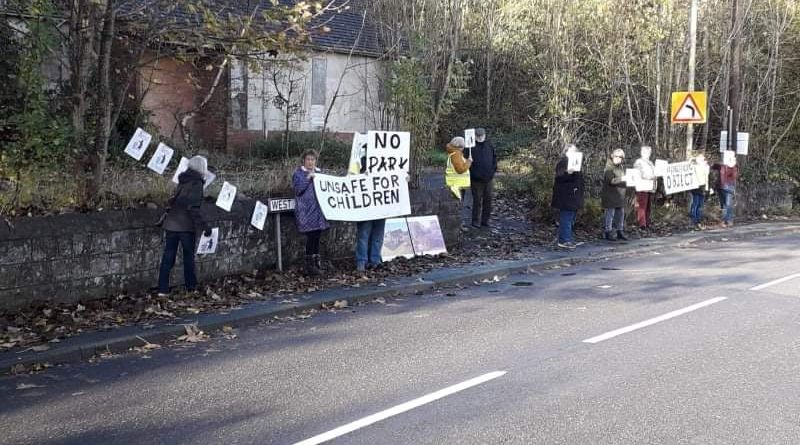 That’s the verdict of protestors who gathered at Albion Bank this morning to demonstrate about the plans for a park.

“We are trying to save the Gower building and communal areas including the play park” they told Telford Live!

“…the top of the Albion Bank is a very very dangerous place for a park. The Gower has or had the best kept park in the area all done by volunteers”

The Gower in St Georges has been the subject of a local campaign to bring the old school back into use. Threatened with demolition in 2014, a year later, £650k had been earmarked by Telford & Wrekin for it’s renovation and bringing back into use. This would leave £700k to find to complete the project.

The Parish Council considered taking on a loan to make up the shortfall and get the project underway, but following discussions with Telford & Wrekin Council this was rejected in Sept 2020 in favour of a development which would see Nuplace houses for rent built on the site. The press were excluded from this meeting.

Lynne Shepherd who chairs the management group said “Applications TWC/2021/0722 and TWC/2021/0724 have been submitted by Nuplace Ltd. to the Telford and Wrekin planning authority for the erection of 14 new dwellings and conversion of the Grade II listed Gower building to provide 3 new dwellings, a community facility and parish council offices.

“It feels like a slap in the face,” said Lynne, “after all the fundraising and volunteer hours we’ve put in to come up with a workable plan. I urge everyone to reject the council plans for The Gower.”

Councillor Lee Carter, Cabinet Member for Neighbourhood, Commercial Services & Regeneration said: “Telford & Wrekin Council fully recognise that The Gower is an extremely iconic asset in the local community and it is our priority to ensure that a scheme is delivered which not only protects the future of the historic building but also finds an appropriate use for it.

There have been a number of failed attempts by community groups to bring forward a financially viable scheme for the site and unfortunately this has only led to the site being sterilised. The building would have fallen into greater disrepair had we not invested to fix the roof and secure the site. Recently the Parish Council fully explored options to turn the entire building into a community facility but again the independent advice received showed it was not financially viable given the cost of conversion.

“It is realistic to think that with the financial investment from the Council the listed building can be used both as a community asset and deliver good quality housing, ensuring there is a long term future for the building.”

Lucy Allan, MP for Telford, fully supports local residents on this issue. She said, “I think it is fundamental that the Council listens to local residents. I am concerned that the Council believes this is a suitable site for their own Nuplace Housing Scheme, and that this money making housing scheme has suddenly led to them withdrawing their support from using this historic and much loved building for community purposes.”

Should planning be approved, the development will be completed in 2023.