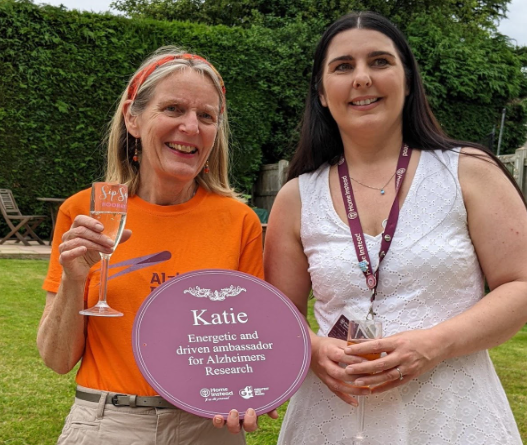 Katie Foster, one of Alzheimer’s Research UK’s long-serving supporters has won a ‘Purple Plaque’ award in recognition of her determination and dedication as a fundraiser and volunteer.

She is one of 16 people nationally to be honoured after being nominated for the campaign run by Home Instead and Greatest Hits Radio to mark the Queen’s Platinum Jubilee and show how older people are still contributing to society. Katie was nominated by Hilary Griffin who manages the Dementia-Friendly Newport group voluntarily.

Katie has supported Alzheimer’s Research UK since 2008. She was inspired to support dementia research after her father, Tim, who had been a prisoner of war for five years after being captured in the defence of Dunkirk in 1940, died with Alzheimer’s disease. She’s chair of the Shropshire Fundraising Group, which she helped set up in 2017. They have raised over £115,000 so far.

As well as the plaque, a copy of which was mounted temporarily on an Edinburgh University building under that of Sir Walter Scott, Katie was also presented with a Fortnum and Mason Platinum Jubilee hamper which she promptly pledged to auction to raise more funds for dementia research.

“This was quite a shock!” Katie confessed “but I couldn’t do anything without all the support of my fellow group members and from so many kind and generous individuals and some wonderful Shropshire businesses. It’s very much a team effort. September is World Alzheimer’s month and we’ll be doing a street collection in Newport on 16th September and then lots more events later in the year as well as launching our unique Shropshire Christmas cards – look out for us in our orange t-shirts We want to help end the heartbreak of dementia experienced by 1 in 3 people born today….”

September is World Alzheimers Month. The group has organised a street collection in Newport on the 16th. 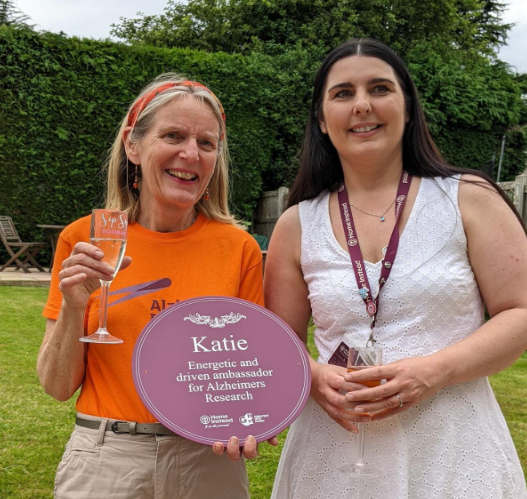