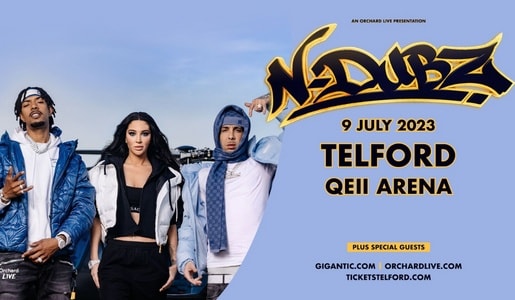 English pop hip-hop band N-Dubz have announced they will headline the Sunday night of the Telford Concert series on 9 July 2023 with special guests Wes Nelson and Nathan Dawe.

The N-Dubz trio kicked off their massive SOLD-OUT Back To The Future Tour UK tour this month and is one of the largest-selling Arena tours in the UK this year. Demand for these shows has been exceptional making a N-Dubz ticket one of the hottest around.

N-Dubz is a trio that consists of band members Dappy, Tulisa, and Fazer. Fazer and Dappy, who have been best friends since childhood, first started rapping together but decided on getting a female voice in the group, inviting Tulisa to the group.

They dominated the UK charts majorly from 2006 to 2011, after which they took a long hiatus. The group announced its reformation in May 2022. Their first two albums, Uncle B and Against All Odds, were certified platinum in the UK. N-Dubz hit No. 1 on the UK Singles Chart in collaboration with Tinchy Stryder in 2009.

The trio won a MOBO Award for Best Newcomer in 2007 and the Best UK Act at the MOBO Awards. The trio’s third album Love.Live.Life charted at number seven in the UK and became their third successive platinum-selling album.

The band announced their reformation with the single Charmer.

Tickets are on sale 10am Friday 25 November from ticketstelford.com