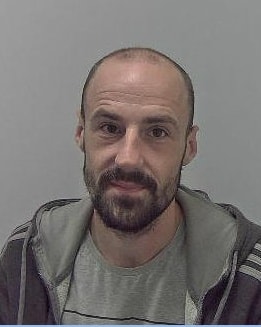 Andrew Harley, 32, of Stebbings, Telford, was sent to prison for three years and 10 months.

He was sentenced at Shrewsbury Crown Court on Friday 11 November.

He carried out burglaries at three properties in the Sutton Hill area of Telford.

On 22 August he removed the glass from a door of a property and stole around £1,500 worth of items.

On 25 August he entered a property via an unlocked back door and stole a laptop and a set of keys.

And on the morning of 30 August he entered another property and stole an Amazon Echo and ten bottles of perfume.

Officers attended and he was arrested near the property.

He was subsequently charged with two counts of burglary and a count of theft.

He pleaded guilty at Kidderminster Magistrates’ Court on 31 August.

Detective Sergeant Alex Stacey said: “We understand how distressing it is to be a victim of burglary.

“We continue to thoroughly investigate any reports of burglary and hopefully this sentence demonstrates that we will do everything in our power to bring those responsible to justice.

“We also urge everyone to ensure their property is secure at all times.”

38 thoughts on “Sutton Hill man jailed for burglaries in Telford.”