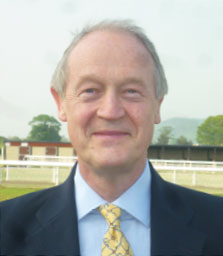 Fresh out of the Ideas Farm in Wellington, I dropped into Wetherspoons for a coffee. I sat by the fire and I was soon approached by a party of three, one of whom I kind of recognised. As he put some paperwork down on the table I noticed immediately that the man was Adrian Blackshaw, the Conservative candidate for West Mercia Police and Crime Commissioner.

I checked that’s who he was as he sat down with his colleagues and we had a chat about the process and his ideas and feelings about the post, the campaign and him.  As this was unexpected, I wasn’t taking notes, or had done any more research than already I had done in this page here. Please feel free to correct anything by leaving a comment or emailing telfordlive@gmail.com.

My opening gambit, a little predictable perhaps, was about the importance of social media in the campaign,  I admit to having been impressed by Dr Simon Murphys embrace of the method to get his message out far and wide, and less so with the @blackshaw4pcc account and that of @bill4pcc. 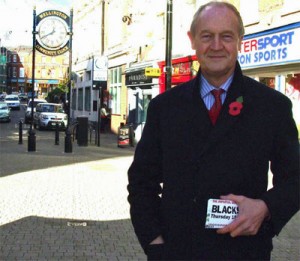 ‘I decided early not to do that, there are people tweeting for me, but with over 160 meeting in 2 weeks, and 200 emails a day, then you can’t do everything’ said Adrian. ‘That said, within day to day policing social media can be a very effective tool to interact with people and get messages out very quickly’.  Adrian went on to explain how well twitter is used by Young Farmers to report suspicious vehicles to each other, and we discussed how effective the local police are by using twitter to report a lack of burglaries  which they do in Telford quite regularly.  This helps to dissipate the fear of crime, which is high up on Adrians Agenda.

We moved on to discuss the political angle. Dr Simon Murphy campaigns on the slogan ‘Keeping Politics out of Policing’ and yet has been pretty much a career politician and a staunch Labour one at that.  I’ve been critical of this, and asked Adrian how political the post will become.  ‘There is no place for politics in the role for any candidate. In fact, once the election is over, it is written into the Act of Parliament that created the posts, that any political influence is forbidden.  In effect, this means that every candidate will be taking the politics out of policing.  Half my campaign team are independent and half are Conservative.  Once the election is over, if I am successful, I’m my own man and will fight for the West Mercia force.’

Adrian was delighted to have been endorsed by three ex-police authority chiefs, completely independently, indeed Adrian was unaware that the candidates were being scrutinised by the trio. ‘It was a real boost to have been chosen as having the right skillset for the job out of all three candidates for the West Merica Police and Crime Commissioner.  Having been involved in floating companies on the stock exchange, and twenty years ago being an investment banker in the States, financial control is a very important part of the role.’. Adrian also discussed his time as an officer in the Army, working with police in Northern Ireland and knowing his way around the public sector, having been involved with public/private partnerships and economic regeneration.’

This chance meeting gave me a bit more of an insight into Adrian Blackshaw, the man behind the blank twitter account and he changed my mind.  It’s a problem with elections that people vote for people who run the best campaigns, not always the best candidate for the job.  By not embracing social media, I really think Adrian’s team have missed out.  I’m going to vote for Adrian, I think he’s the best man for the job, but you are going to have to make up your own mind.

5 thoughts on “Taking the Politics out of Policing”