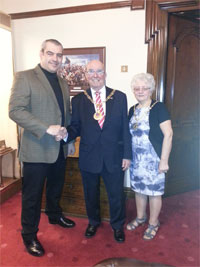 A Telford business has received special congratulations from the Mayor after scooping a national accolade naming them the ‘most-loved’ kitchen company in the UK.

Kitchens by R&R, based in Priorslee, won the ‘most loved in the UK’ in their business category in thebestof UK 14 Days of Love campaign, which ran from February 1 to 14.

It is the second time they have been crowned the winning kitchen company after being awarded the title in 2011 thanks to the testimonials of their customers.

The achievement of R&R was officially recognised at an event hosted by the bestofWalsall at The Mayors Parlour where Mr Burrows received a certificate from Mayor, councillor Dennis Anson, stating Kitchens by R&R is the most loved kitchen company in the UK.

Mark Burrows, of R&R Services Ltd, which also works on bedrooms and bathrooms, said: “I am really pleased that once again our clients have voted us the best kitchen company in the country adding to our award from 2011.

“The whole team are proud to be recognised as one of the best there is in our field, especially when negative publicity relating to our industry is all too commonplace these days.”

Sarah Rhodes, of the bestofWalsall marketing website, said: “We are delighted that R&R have won this coveted award which is testament to the quality service that they provide and reflected in the number of positive reviews left by their customers.”

R & R Services was founded in September 1998 and has gone from strength to strength providing home improvement projects large and small across the country.

Throughout the years client testimonials have consistently praised the work and the personal and tailored level of customer service provided by the company and Mr Burrows said he is extremely proud of the work that has been done.