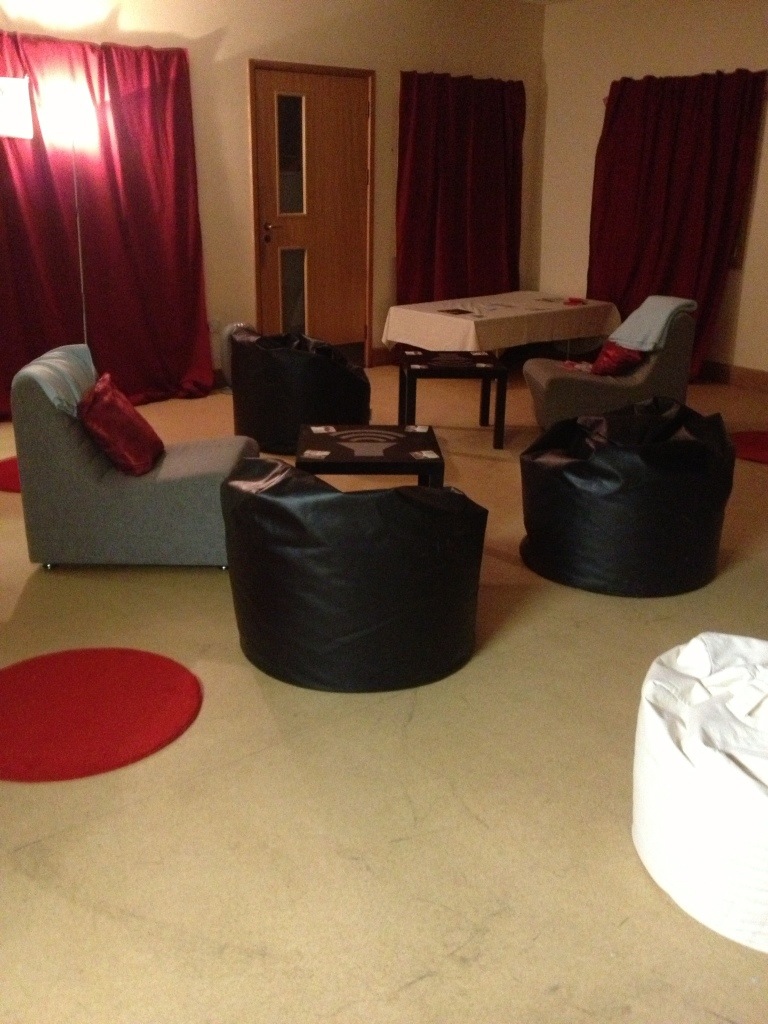 Eleven o’clock on a Saturday night. Normally I’d probably have had a glass of wine or two and be coming to the end of a film on TV I’d seen before. Tonight was different. As part of my commitment to carry out four volunteering slots in Telford, tonight was the third, and lining up to be one of the most arduous yet. 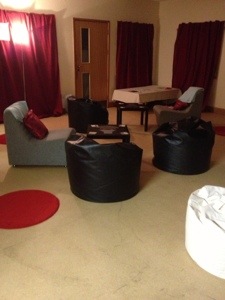 Sanctuary offer a safe space for vulnerable clubbers in Wellington, Telford to gather themselves, sober up, get first aid, or warm up in the dry with some free tea & toast in the makeshift cafe area at the back of the Methodist Church at the top of New Street.

Makeshift, although describing exactly what it is, does not convey how cool the team make this place. The church is newish, replacing an old wooden structure, and the room we’re transforming tonight can host everything from the Brownie & Boys Brigade meetings to playgroups. With some subdued lighting, chill out music professional kitchen and laid back seating, I can think of many cafes that don’t come up to standards here.

11:10pm and creating the cafe is the first task, bringing all the tables, chairs and lighting down from the cavernous attic using the new stairs (previously a ladder was employed and the cafe was lowered down the hatch as I imagine an 18th century schooner was loaded by dockers) piece by piece. The set up is complete and subtle Ibiza chill out sounds float around as we chat about previous experiences and the night ahead.

Including me, the team comprises six. Deborah, Heather, Linda, Dewi & Sean. Safety briefing commences, and I’m impressed with both how the evening has been organised with regards to safety, and how professional the set up is. Everyone has a personal radio, there are trained first aiders, no one is left alone and personal safety is paramount.

12pm. I’m handed my Sanktuary body warmer and we split into two teams. One looking after the cafe and one ventures outside with signage, the goodies box and a table. It strikes me how dark it is on the short walk from the church car park to Pussy Cats entrance. There is a light out on the Tan Bank Car Park which doesn’t help.

A steady stream of people in various states of sobriety drift from all directions to finish their night with dancing at the club. Small groups of revellers congregate as they wait for friends to all go in together. The atmosphere is convivial and good natured. Our first encounter with a clubber about 12:30am sets the scene for the evening. ‘You guys are amazing. You helped get my friend into a taxi a couple weeks ago’.

Sanktuary was set up by Mark Berry in 2008. It’s a Christian group based on the willingness to help people wthout judging them, although the team point out that volunteers are welcome whatever their faith, or even if they have no faith at all. It’s not about converting people to Christianity or promoting this Church. It’s about keeping people safe, caring and making each Saturday evening in Wellington a much more pleasant place to be. Who could argue with that? It’s true to say, that without the Church offering the cafe facilities, it would be a much poorer experience for the volunteers and the party goers.

Our hour shift outside the club draws to an uneventful close. Just when we are about to go inside for a welcome hot drink and a warm up, a woman emerges from the steel gates in a slightly agitated state. She’s on her own, having been ejected from the club & manhandled out. From what we can gather, following an altercation in the club, she has been separated from her friends and her bag is missing. The bag contains her life. Mobile phone, ID, keys, money. Right now, all she has are the clothes she stands up in. Her friends don’t know she is outside. Deborah & Heather approach. She has a cut above her eye, nothing too serious, but she doesn’t want anyone to look at it.

Deborah is a leader. Not just a leader of our sub-team, or the team as a whole, but a leader of people. I’ve seen leaders before and Deborah knows how people work as well as any I’ve seen. At 2am this is inspiring. While Heather consoles and calms the lady, Deborah negotiates with the door security to find the lady’s friends and attempt to retrieve her belongings. As the story unfolds, the clubber tells of an assault and the police are called. A few minutes later the police take over and an ambulance arrives to take the clubber to A&E.

I wonder what would have happened had Sanktuary not been here. No money, no phone, separated from friends. Who would have helped her? If this were your daughter, your sister, your friend or neighbour: how would you feel? If you found yourself in this situation, what would you do?

About 2:20am we went inside. The tea was warm and welcome. The jammy dodger, perfection. We took a moment to reflect and compare with previous weeks. “I’ve never done a shift where there wasn’t at least one fight”. “We had seven fights a few weeks back, so we are due a break”. Heather decided to volunteer after seeing the tweets from @sanktuary on twitter. Her daughter has also helped out and is a similar age to many we’re seeing stepping into the free flip flops.

It’s 2:45am. I’m glad that I took a nap yesterday afternoon and freed up my 4am to 11am Sunday morning schedule so I could have a lie in. A few minutes later and we’re back outside. One of rooms in the club is now closed and the cloakroom staff have gone home. A sign that the night has peaked and no one else will be allowed in. 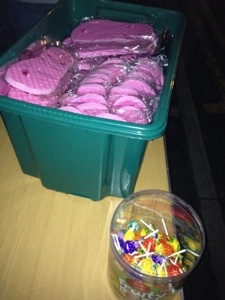 The box of flip flops, space blankets and lollipops becomes lighter as revellers in good spirits take the relief offered. The silver space blankets turn the girls into clubbing superheroes as the cold wind brings goosebumps up Tan Bank. I lead a few people to the cafe from the club gates, and then take a walk back, leaving the inside team to make the toast and coffee in the warm.

3:45am. A police patrol turns up and stands with us. The club closes and those left inside meander out to wait for taxis. Often a flash point, the council Taxi Marshalls are on hand to make sure the right people get into the right cabs. Door staff, Police, Taxi Marshalls & Sanktuary team all have a mutual respect for each other. It’s a good feeling.

By 4:10am it’s done. The last clubbers are taxied away. No fights tonight. The last one to leave tells us she has work in about 6 hours. We take the table, collect up the signs and we head back. As we turn the corner an alarm gets louder and louder. The last clubbers to leave the cafe had thought it a good idea to set off the fire alarm as they exited the building. Cue Deborah making phone calls at 4:30am to other Church folks to try and find a way of turning it off.

We pack the cafe back into the attic, the chill out sounds replaced by the shrill two tone alarm deafening us all. The evening complete, I head home. It’s 4:45am and properly light. Nigh on six hours, but certainly doesn’t feel that long. An evening of tea, good company, caring and keeping people safe. A eye opener most certainly, but more for the good of what the Sanktuary team deliver than the post-club carnage set in my minds eye.

3 thoughts on “Sanktuary. A safe space.”