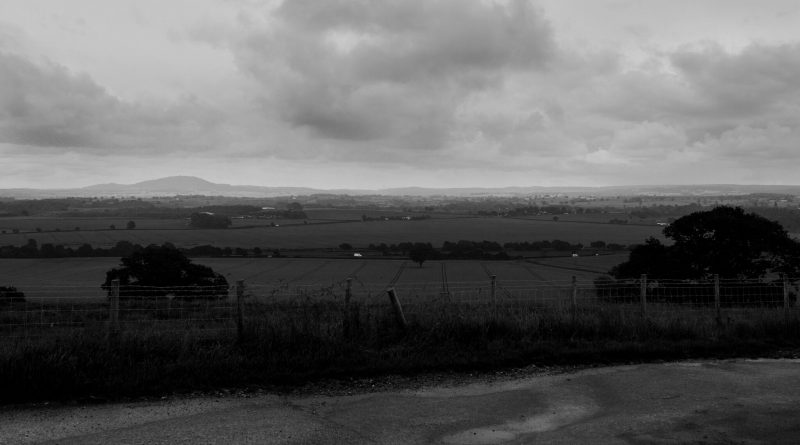 I’ve always had an interest in the paranormal; I saw my first spectre at the age of eight in Ireland whilst on a family holiday in the mid 80s. It was a black dog with red eyes that came down the stairs at a holiday home that my family and I were staying in. The product of an over active children’s imagination? Quite possibly. But I’ve always had an open mind nonetheless.

Steven Collins is a broadcast journalist with an interest in all things Paranormal.

When I moved to Shropshire four years ago I decided to put my interest and background in science to use to examine the “Shropshire Triangle”. I’ve seen the area referenced several times in the annals of UFO literature. I grabbed the opportunity of my change in location to spend time in active areas at night collecting data. I regularly hold sky watches at locations in the county.

Lyth Hill, Shrewsbury is superb for its high relief point to view Shropshire and the Welsh borders. I have gravitated towards collecting primary data as there are only so many books on the subject one can read. After all, ‘seeing is believing’. I’ve invested in a quality night vision monocular which I linked to a digital video camera and I publish as time permits onto Vimeo.

One object travelled across the night sky from right to left. It did not differ as a light would do on an aircraft; no port or starboard lights. There was no noise. When I examined stills of the orbs, I could clearly see a ring of light surrounding a core with a different intensity. Shropshire and the surrounding counties of Powys and Staffordshire have always had something of an elevated prestige and I feel fortunate to have such ‘hot spots’ right on my doorstep.

Shropshire has two RAF bases: Cosford (a tri-service training establishment for aerial photography); Shawbury, a tri-service station for the training of helicopter pilots). I regularly see an assortment of both fixed and rotary wing terrestrial aircraft. Often, they carry out training at night. Empirical evidence exists for both bases on a late night in March 1993 reporting an unusual object floating over both bases. These testimonies exist at the Public Records Office, London. RAF Shawbury and Cosford were in communication with each other as a triangular, silent craft travelled from one to another. Observers at Shawbury reported a scanning light near the perimeter of the grounds.

Shropshire has seen recent crop circle activity reported in the press for the Summer of 2012. It has many historical landmarks. A notable landmark is the ancient Roman city of Wroxeter. The A5 road that runs to Staffordshire, a nearby county is part of the old Roman Watling Way that was significant in transporting goods during Roman settlement in the area. The country has a major geological landmark: The Wrekin. The geology is interesting comprising both old and new geological types and it contains quartz. After examining lay line mapping of the area, the area contains extensive lay line networks, many intersecting on both The Wrekin and Wroxeter map points. At both of these sites I have witnessed first hand UFO phenomena. I mention the above, as I see this, what I call ‘the holy Trinity’ in many UfO case studies.

I have contacted a local resident who is the focus of this article. I read about an incident in newspaper archives about the case of three young ladies in the early 80s who travelled back from a night club, Tiffany’s, in Shrewsbury. They had an episode of “missing time” and Val Walters, certainly experienced the “Oz factor” in her interaction on that warm summer night.

Val Walters, a then twenty year old was travelling on the old A5 road after a sober night out ( I feel I have to mention that no alcohol was consumed as detractors tend to see alcohol as some king of psycho active drug when in fact it is a depressant). They were laughing and joking with the windows down on a July early morning when they saw a strange light in the field opposite the Three Horse Shoes pub. Val can remember the car stopping but it was only under medical grade hypnosis that she could remember the finer details.

Val recalls during her interview hooded entities as well as typical grey types. She felt strongly that one entity was feminine who took an interest in her fashionable high heeled shoes and tried them on in front of Val! But Val was left with an emerging impression, over time, that she was somehow hoodwinked and not told what their true agenda was. Val recounted odd events earlier on that evening in the nightclub. She recalls three chaps all dressed in white trousers and shirts unusual fashion even for the U.K. in the 80s!
The trio went to the toilet never to emerge, even though Val and her friends stood nearby and kept waiting for their return. The young ladies were actually quite pleased they did not see the chaps again as they requested a lift to Telford. When they left the nightclub, just south of the town centre before joining the A5, they were nearly driven off the road when a fast car seemingly from nowhere tried to force them off the road. It was significant enough to cause the driver, Viv, to stop to regain her composure.

A few miles along they saw roadworks with men that were dressed in workman’s clothing that looked out of place as if they did not look like they fitted in. Could it be emergency gas pipe repair? Possibly. But I see it as a series of things that fit into the “Oz factor” (as coined by Jenny Randles) to create a sense of foreboding. Were these incidents trying to somehow delay the trio? And, if the answer is yes, by whom and under whose command?

Today, Val is left with a sense of having been given a small part of a larger puzzle and her life’s direction is towards synchronicity and ancestral connections from the past. She believes that when she is ready she will be given more information to help her. I’ll keep a keen eye on Val’s progress and report any further updates, with her permission, as they emerge.

At Lyth Hill, we have seen orb activity over Wroxeter moving over a coal power station in Ironbridge. I’ve also witnessed activity over The Wrekin. We have seen the orbs (sometimes up to three together working intelligently) doing figure of eight loops, emerging and disappearing and move across the horizon in the blink of an eye. We tend to feel some sort of interaction often when we are fatigued and about to give up for the night they will show themselves. Sometimes when we are excited they will appear and even travel towards our direction but then when we get either too excited or scared they will disappear.

an energy source or to monitor pollution output from fossil fuel. On one occasion whilst sky watching at Lyth Hill, I recall strong sky activity followed by whispering voices emerging from behind me in a circle of trees. On investigation there was no one there. I felt like something or someone was trying to either distract me or to get me to leave. So my friend and I left.

Strange Lights at the Wrekin

At The Wrekin, I have seen what appeared to be a meteor flash through the sky but meteors don’t travel in horizontal straight lines and suddenly vanish. Also no activity was tracked using sources that map meteor flight based on time and location data. In the tree line on the very same night whilst descending the hill on foot we witnessed strange lights that appeared to be car headlights, navigate between a coppice of trees to our left about mid point between the pinnacle and the base. I assumed it was light activity coming from vehicles in the countryside below or a car park on the hill. But there is no car park at the top. And the trees were dense.

There is a car park at the base on The Wrekin but it is located on the other side and not visible from where we were standing. I went into the trees and I could see the light moving around the trees like two car head lights floating in mid air not attached to anything but keeping an equal constant distance apart. I perceived the lights having a bright glow but little of the glow lit the ground around which I thought was odd. I believe it moved in a snaking pattern from side to side at a moderate walking pace. There was no sound. I estimate the lights were about 20-30 meters away and between four to six feet off the ground. After about a minute it seemed to disappear. I didn’t feel like it communicated or passed any major knowledge to me or was even interested in my friends and I. There was no missing time that we were aware of.

Recently, my friend and I have observed an orb split into three then form a stack and travel slowly across the horizon. I have seen golden orbs spin like a spinning top and on a recent drive back home to Telford, I have seen a golden orb appear like a throne hover in the air above the motorway slowly rotating. I have attempted to rationalise the situation, possibly even thinking about a delusion shared by two with some sort of telepathic link.

The more I see, the more I’m driven forward in a quest for knowledge. Its become a sort of addiction. While others are out drinking at the weekend, I’m sat on the hill scanning the horizon. The more we go, the more we get experiences. We sometimes get there with a sense that something will happened and we are rarely disappointed.

Future sky watches are planned for the borderlands with Wales as well as on going watches at well as more watches at The Wrekin and Lyth Hill. I plan to revisit the coppice too and log times and duration of any activity and to set up night vision cameras in the area and take EMF and other readings. I’ve read that by frequently visiting an area with a close group of people activity sometimes increases so this is how I’ll conduct future watches.

I would love for the U.K. to have set up a network of communication between all groups, to standardise data. I know there is MUFON but that seems to be American-centric. I believe remote cameras could provide a network for monitoring.

In science, ‘hard’ evidence is key. But even such evidence can cause debate. Qualitative data in the form of witness testimony I would say is just as valid as magnetic readings, image evidence and radar reports. Yes, things can and do get distorted over time but the essence of reported narratives remains the same in most cases of reports, particularly as one can create connections between data forming commonalities. Certainly, Val’s narrative has changed little and I’ve talked to her several times and each time the facts remain the same.

Steven Collins is about to set up a monthly paranormal show, ‘The Night Train’, on Nova FM, Newport, Shropshire. Please check out the show.

You can also email Steven at Stevenmcollins@me.com

2 thoughts on “Strange goings on in Shropshire”