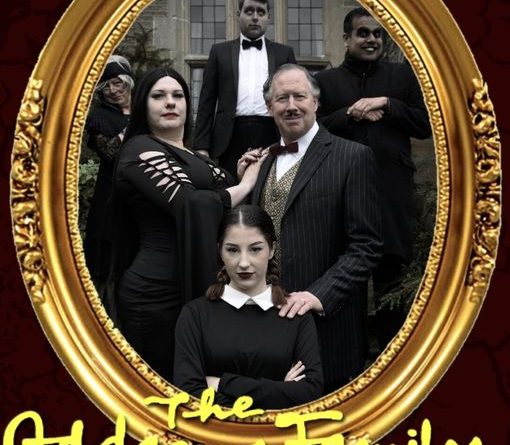 At the final bows of their last show, The Sound of Music in October 2019, none of TADLOPs members expected it would be a full two years before they would be able to tread the boards again.

They are thrilled to finally be returning to Telford’s The Place Theatre for their production of The Addams Family Musical on the 23rd and 24th of October. This kooky musical sees a grown-up Wednesday Addams navigating falling in love with a “normal” boy, much to the chagrin of her family. It is a hilarious yet sentimental show with a dark edge, that should have audience members of all ages click-clicking along to the musical numbers.

The rehearsal process for this show has been unlike any other; with taped auditions in May, followed by two months of rehearsing over Zoom or outside in small, socially-distanced groups to adhere to covid restrictions. The first full-cast in-person rehearsal at the end of July was a celebration for all in attendance, finally getting to sing and dance together again after such a long and difficult time.

Despite being unable to stage full productions over lockdowns TADLOP has tried to keep its community spirit, organising online quizzes and play readings for its members, as well as airing two online concerts to try and raise much-needed funds to keep the society afloat ahead of its 50th year. However all are excited to be back on a real stage to perform to an in-person audience, the way that theatre should be experienced.

TADLOP Chairperson and Director, Louisa Kempster says “When we started our rehearsal process for Addams Family we could only meet via zoom or in small groups outside with our principal cast. It was tricky, because I don’t think any of us have ever rehearsed like that, but in a way it was quite useful to have that time devoted just to them. It was also clear that everyone was eager and putting in work to learn their roles outside of rehearsal time too, which as a team we have all been grateful for. The night we finally got together in a room with all the principals was wonderful, and it has been brilliant to see all the little pieces we worked on start to click into place. The chorus have been really enthusiastic about launching back into things too, and there are some amazing characters developing within the ensemble. I think the type of show that The Addams Family Musical is has really helped things too; it’s a lot of fun and there are so many opportunities for people to let out their creepy, kooky, mysterious and spooky sides! We are so grateful to all our new and returning members for their patience, support and enthusiasm throughout the process, especially as things have changed due to government restrictions a number of times. It’s been such an honour to work with each and every person involved.”

TADLOP will be performing The Addams Family Musical at 2.30pm and 7pm on Saturday the 23rd and Sunday the 24th of October, at The Place Theatre in Oakengates, Telford. Tickets can be purchased through the box office at https://www.theplacetelford.com/…/the-addams-family/4502