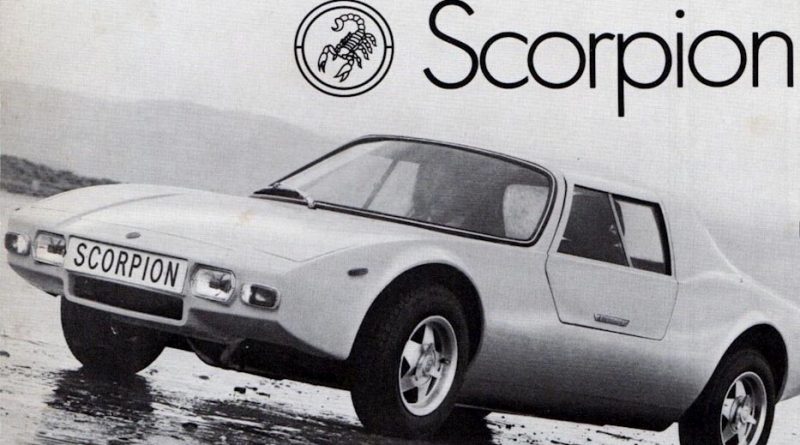 Telford has a long history of making vehicles and parts for vehicles. In the early part of the 20th century, G F Milnes & Co Ltd opened Hadley Castle Works to make first tramcars, and later motor car wheels & bodies in what most people around here would know as ‘Sankeys’. At it’s peak in the mid 70s, the factory employed over 6500 people. The biggest employer in the town.

In a corner of Stafford Park in 1973, a factory opened up making a small sports car. Designed by Tom Killeen, a former Jensen engineer and draughtsman with a specialism in developing monocoque-bodies sports cars, the Innes Lee Scorpion was born.

It looked a bit like a kit car. Fibreglass body, donor engine from a Hillman Imp, but this was a proper factory-built car. Innes Lee, part of Innes Lee Industries of Lutterworth, launched the car at the Earls Court Motor Show in November of that year.

The car featured gull wing doors (removable), pop-up headlights (operated by two windscreen wiper motors an idea patented by Killeen as far back as 1959) and a price tag of £2,250. Compare that to a Ford Cortina at £1022 and a litre of four-star at just 8p, this car was not cheap.

Despite the Motor Show launch, you will not have failed to notice that Innes Lee did not become a household name, and the Scorpion failed to help hold back the tsunami of foreign cars making their way into the UK. At the time, 70% of cars sold here, were made here.

Anthony Reeve, a Scorpion Owner has carried out some sterling research in the car and its demise: “It is thought that around 10 were made in total. Of these probably seven were assembled by Innes Lee, and two built up later from the remaining parts. One final car was auctioned in component form and bought by Anthony Reeve who was thus able to construct the final complete car. The company had been dissolved following poor sales caused by an alarmingly high price of £2650 for the finished car in 1973 (a Ginetta G15 could be had at the same time for only £1500). This was aggravated by alleged financial irregularities when the company was sold to a Welsh concern.”

“Before owning a Scorpion I discussed the car with an army vehicle enthusiast at one outdoor classic car show. He said that he had driven a car transporter which took a number of Scorpions away from the factory on behalf of the receivers. They were delivered to creditors in part payment of outstanding debts, one such being a local garage who had provided petrol on credit for the test cars and staff. There is a widespread but unproven belief that more than 10 cars were in fact made.”

“The Scorpion project was almost the undoing of Chesman Engineering, famous for Imp engine tuning. A number of fully built up 998cc engines had been tested and provided to the Telford factory, but no payment was received. With great foresight a van was despatched one evening to recover the engines a matter of days before the receivers were called in. Security staff at Stafford Park were unperturbed by this, as they explained the rent on the factory unit had not been paid for at least 6 months!”

AMI Plastics of Stafford (who had been making the bodies for Innes Lee) had re-possessed the moulds when they saw the company getting into trouble. They then put them into storage.

The factory site is roughly opposite the Stafford Park Fire Station, Masterplug are there now.

Tom Killeen passed away in 1991 having a had a huge influence on car design, and some that he produced still remaining, in barns and garages, under covers. Many bearing Shropshire registrations.

If you worked here, or remember it, I’d love to hear from you.

One thought on “Telford’s small part in Car Manufacturing”