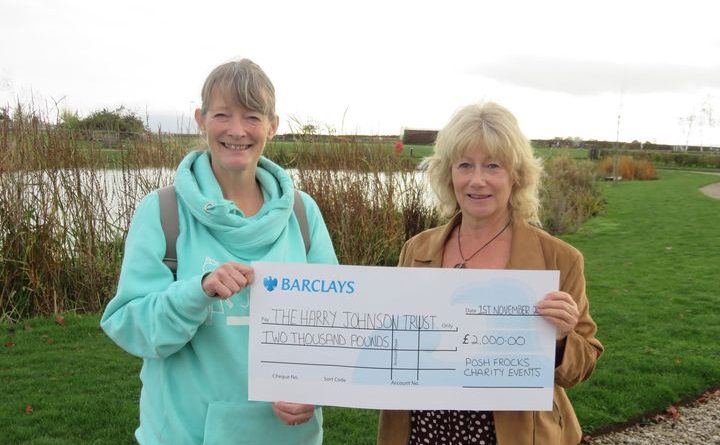 After a three-year break over 80 women gathered for the return of the Posh Frocks Charity Dinner at Hadley Park House Hotel to raise money for The Harry Johnson Trust.

Organised by Kim Gilmour of Connect Consultancy, the Grand Hamper Prize Draw raised £1220 on the night with a further £400 match funding from Sarah Lowe through her employer. The amount was made up to £2000 after a personal donation of £280 from Karen Turner-Atkinson, Director of Imagine Training who was moved after hearing Sally Johnson, speak about the charity which Sally founded in 2014 in memory of her son.

The Harry Johnson Trust works across Shropshire and supports children with cancer and their families, raising funds for both essential services and treats such as Christmas Hampers and supermarket and restaurant vouchers.

Sally Johnson said: “Thank you to Kim and all who helped organise this special event and for raising such a lot of money which we are already putting to good use. We have been out this week buying items for Harry’s House, a beautiful static caravan in Mid Wales specifically for use by families whose child has care or treatment from the children’s oncology and haematology team at Shrewsbury and Telford Hospital Trust.

The caravan will be used for up to 40 holidays a year and will also be offered to bereaved parents, and staff from the ward who have been through tough times as part of their role.”

After the event, Kim said: “It was lovely to be back meeting old and new friends and raising money for a small local charity which is such a worthy cause. Sally works tirelessly to improve the lives of others and we are so glad to have helped the Trust make real headway with Fitting out Harry’s House. I would like to thank everyone who donated gifts for the hampers, for spending generously on the night and for the additional donations from Sarah and Karen.”

A special surprise donation of £150 for Alzheimer’s Research UK was made to Katie Foster in recognition of her personal efforts as chair of the charity’s official Shropshire Fundraising Group. ” I was totally taken aback by Kim’s generous gesture and her kind words about the work we do,” said Katie, who also raised £137 from the sale of the Group’s Shropshire Christmas Cards on the night.

Kim added: “This brings the amount raised at our event to £2287 which is just shy of the record-breaking amount raised in 2019. Our group has raised over £33,000 for local charities over the last 20-plus years.”