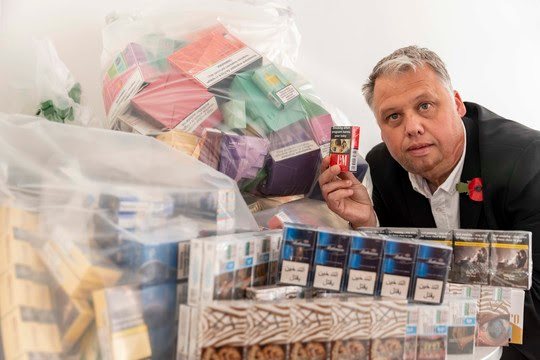 The haul was estimated to have a street value in the region of £10,000.

Deputy Leader and Cabinet Member for Housing, Enforcement and Transport, Councillor Richard Overton said: “Illicit tobacco trading has links to organised crime and we are sending a clear message that we will continue to keep our borough and its residents safe.

“While cheaper cigarettes might seem like a bargain, the money supports more serious crime and gangs and takes trade away from legitimate traders.

Police Constable Sharon Major from West Mercia Police, said: “We visited a number of shops in Telford following reports of counterfeit and illicit tobacco being sold, which saw a significant amount of seized.

“Operations like this prove that working closely with our partners, such as Telford & Wrekin Council, we are able to prevent criminal enterprises continuing their distribution of illegal products.”

“We will continue to act on evidence to target unscrupulous sellers making money from people’s health and an illegal activity.

“Cheap tobacco is not a victimless crime, at pocket money prices, cigarettes are accessible to younger people and leads to addiction in children.”

Using specialist detection dogs and intelligence, officers exercised their powers to inspect. The dogs can sniff out even small quantities and places where tobacco had previously been held.

Councillor Overton added: “There is rarely anywhere to stash goods, no matter how sophisticated the hiding place.”

The retailers have not been named. Anyone wishing to report the selling of illegal tobacco can report anonymously online to Trading Standards at Citizens Advice Consumer Helpline on 0808 223 1133.