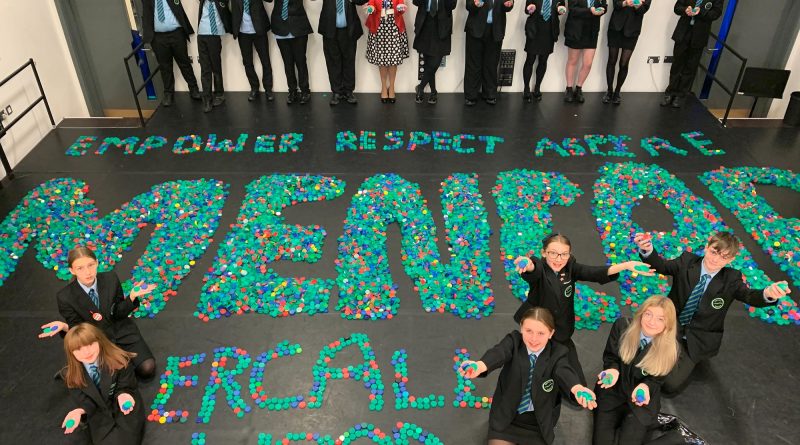 When staff at a Telford secondary school set up a recycling challenge to collect leftover bottle tops, they had no idea just how much it would escalate.
Ercall Wood Academy in Wellington has now collected a staggering 36,000 bottle tops which are being used to help raise funds for learning disability charity Mencap.

Pupils, staff, parents and several local businesses have embraced the campaign, and the huge pile of bottle tops – which can be converted into cash for charity – are due to be handed over later this month.

The campaign started shortly before lockdown when Ercall Wood took delivery of a 7ft hollowed-out metal giraffe from the British Ironwork Centre in Oswestry and challenged pupils to fill it with bottle tops.

Mary Jennings, the school’s Head of Ethics, said: “The project was part of our Ethics Studies, considering our role in the world and thinking about environmental issues recycling.

“Collecting bottle tops was a practical way to demonstrate our concern and do something positive as well – but the way it has just snowballed since then has been absolutely amazing.

“In April we had collected about 6,000 and put a barometer outside the classroom with a target of 20,000 on it. Never for a moment did I think we would reach that target, let alone smash it to pieces.

“It’s been a huge community effort, involving students, parents, teachers, cleaners, dinner ladies, plus a number of ex-students, local businesses too including Morrisons. Everyone has got behind it and worked together to achieve somethingincredible.”