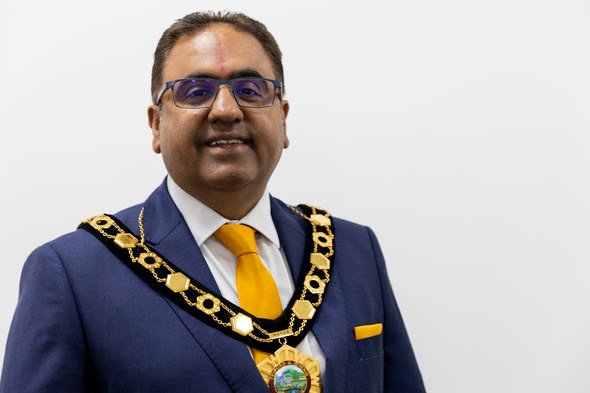 At the AGM last night, the full council elected Councillor Raj Mehta to be Mayor of Telford and Wrekin for 2022-2023. Cllr Mehta will be supported his wife, Mayoress Dr Poonam Mehta.

Councillor Mehta is one of two councillors for the Horsehay and Lightmoor Ward. He has served as Deputy Mayor for the past two years and was also previously Mayor of the borough in 2018/19.

Councillor Mehta is also Chair of Telford and Wrekin Interfaith Council, which he set up and is now based in Wellington. In his day job, Raj has been working with the NHS for almost twenty years and he runs a medical practice in Birmingham.

“We are all rebuilding connections and trying to get used to post-pandemic life, so in my time as Mayor I want to be a Mayor for the whole borough, a Mayor for all communities; an interfaith Mayor. I will be working to connect communities more strongly and show how, as a borough, we are united. Unity in the community is my aim.

“It is so important that we celebrate the diversity and cultural wealth that we have here in Telford, so building bridges has never been more important. That’s why I will be relaunching the Building Bridges project, and also working alongside the Leader of the Council to raise money and set up Telford’s first ever Youth Zone.”

During his mayoral year, Cllr Mehta has chosen to use the Mayor’s Charity Appeal to create and launch Telford and Wrekin’s first Youth Zone, which will act as a safe haven for the next generation of young people and offer a range of opportunities and activities.

Also at the AGM, Councillor Arnold England was elected as Deputy Mayor of Telford and Wrekin for 2022-2023. Cllr England is the representative for the Brookside Ward, and has been borough councillor since 2011. He also sits on both Stirchley and Brookside Parish Council and Madeley Town Council and has previously served as Mayor of Madeley.