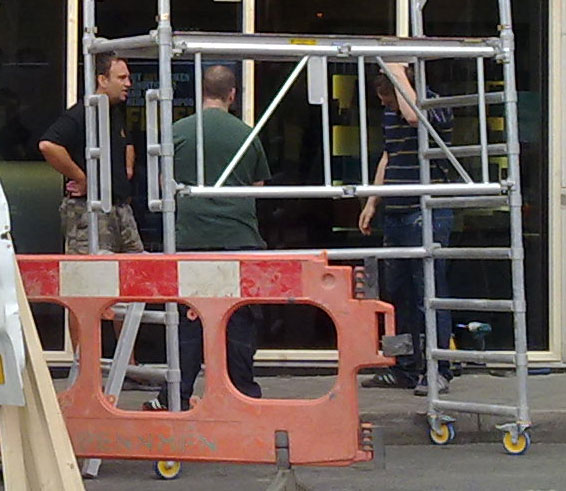 Earlier this year, we decided to try and create a stir with a April Fools prank that would reach across the whole of Telford.  The objective was to fool the local paper The Shropshire Star, in the hope they would print the story. The target date was the 1st of April for the climax of the joke and the big reveal, although convincing the public of some outlandish trick on April Fools Day would take a bit of planning if we were to pull it off.  This was a once only, never to be repeated operation, so it had to be crazy and believable, but funny too.  If you want to run something similar, this will serve as guide on how to make it work for you.  Welcome to Operation TelfordZombie!

1) Get others to help
Share your ideas with a couple of trusted people to make sure that what you are going to do isn’t too offensive and they will have some great ideas that you hadn’t thought of.  They can also help enforce the ideas as true.

Got your idea?  Great.  Ours was that we were helping to organise a zombie movie shoot in Telford and we needed some willing members of the public to act as extras.  Simple eh?  With getting on for 4,000 followers on twitter in the town, we dropped a few teasers out in the week before April Fools Day, to help the message spread using the hashtag #telfordzombie and also on Facebook.

The premise was that the filming would take place at a secret location and to keep checking back to see where they had to meet up to be in the film.  Each day I’d release a few bits of information carefully building up into a credible story, backed up by a webpage that people could share.  I’ve left this intact below.

3) Beware annoying people too much
Most people will see the funny side after the event, but think about peoples feelings.  We had one guy ask if his kids could be involved in the movie shoot.  I didn’t want to let him get his kids hopes up for a week only to dash them at 10am when they probably hadn’t slept that night. Come on, who would be that cruel.  Another guy was wanting to book a day off work to appear in the film.  At least what we had done so far what pretty believable.

4) Let people in
Some people will guess.  Congratulate them, ask them not to reveal your secret but to play along and help out by encouraging others.  Without exception, those that guessed it was a monumental hoax, played along just great and saw the funny side.

This thing was going.  A facebook reach of about 27,000 people (whatever the hell that means!) and going skywards on Twitter, this was building, but the best was yet to come.

5) Build Credibility
I had some photos I took in 2010 when the EDL came to Telford.  Everywhere was boarded up and Police came from all over the UK.  I’d set the scene for our #telfordzombie followers with these photos in mind. How could anyone not believe this was true!

6) Give a few clues
Anagrams of ‘April Fools’ are critical for a good hoax, I’m amazed that more people didn’t realise that the film name for Telford, ‘Flair Pools’, was an anagram of April Fools.  The itinerary also spelled April Fool when you looked at the first letter of each line.  All good fun.

On the day, I tweeted the last of my photos as if I was live tweeting the filming being set up before the big reveal.  Just before I uploaded the ‘Joining Instruction’ with the secret location (actually a PDF certificate thanking people for being part of the prank and showing the clues) a Shropshire Star journalist private messaged me to ask for the location so they could send a photographer.  WE DID IT!

All in all, it was time consuming, nerve wracking, scary and it so nearly never happened, but in the end it was priceless.  Never again though!

See the tweets as they happened on Storify

While many may feel that Telford is home to many of the undead already, news comes into Telford Live about a Zombie film that is currently in production.  Working title of ‘First Dead’, the production company has appealed for Telford residents to help out as casual extras in the short scenes which are to feature as part of a news report in the film.

Zac, the director of the filming unit, sets the scene for us: Its 2 days after the first reported Zombie cases.  Much of the country is watching in awe as contaminated food in the Midlands is having a very strange effect on the population.  Within hours of consumption, people are falling into a comatose state only to reawaken with a blood lust and a craving for human meat.  Once bitten, what’s left of the victim becomes infected too, and joins with the others on a blood lust rampage through local towns, where the residents are chased through streets and shopping centres, some falling victim along the way.  In one town. the rampage is captured by a local TV crew and the footage appears on news channels around the world, and that town is Telford, although the actual town name that’s shown will be ‘Flair Pools’.

He continued ‘We’re looking to get between 20 & 40 people to join the cast as extras.  We have about 25 cast members and many of those will be acting as Police, trying to contain the zombies.  The extras need to be prepared to run away in horror as the Zombies enter the top of the street and make their way through the town.  No one is going to get bitten, so they will be quite safe!  The whole thing will be be filmed by a handheld camera, just as if a TV news crew were there, it will be full on shaky-cam because they will be running too, amongst the crowd”

There will be no payment, but look out for the asst. director who will take names of those involved and they will get a credit at the end of the movie.

You’ll need to be at the assembly point for 2 hours on Easter Monday from 10:30am.  The location is a closely guarded secret at the moment, but will be posted here around 9:30am and on twitter using the hashtag #telfordzombie

Don’t forget to check back for full details tomorrow at 9:30am!  Got a question?  Leave a comment below.

7 thoughts on “Zombie Movie to be Filmed in Telford”